Being within easy reach for a day trip from the main population centres in Scotland, the southern highlands offers hundreds of different hillwalking options. Ranging from an ascent of the highest mountain in the southern highlands , Ben lawers or a longer day bagging mulitple munros There really is something for all. Below is a very small selection to give you a flavour of whats on offer. 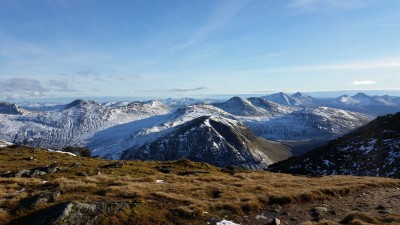 Climb one of the most recognisable peaks in the southern highlands.

Combined with its neighbour Beinn a Dothaidh, these 2 Munros make for a great day out with fantastic views across the blackmount on a clear day.

Starting from Bridge of Orchy station , we'll take a route to the bealach before ascending along a wide ridge to our first Munro Beinn Dorain.  The route then returns back to the bealach where we head to the second peak of the day Beinn an Dothaidh with it's great views across the expanse of Rannoch Moor, before returning to the bealach and back down to our start point at the train station or if time allows , the cosy hotel bar!. 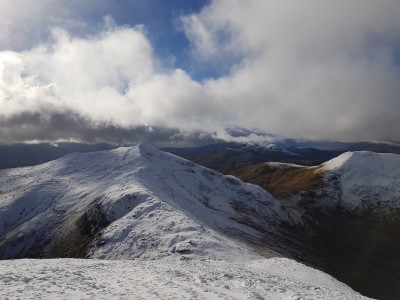 Despite being the 10th highest of all the Munros, Ben Lawers and it's neighbour Beinn Ghlas offer a great introduction to the world of Munro bagging. Starting at over 400m at the high level car park the route takes us through a lovely nature trail before ascending steeply to the wide ridge of Beinn Ghlas. We then follow the route over this Munro before descending slightly to a bealach and then ascend the final push to the lofty summit of Ben Lawers at 1214m.

The return route takes us back to the bealach before we take the alternative descent into Corie Odhar and back to our starting point.

Made with SimDif
Andy Gillies